The War Plan Orange community is a group of wargamers who play historical PC games online.

Following a series of connection issues, which have since been resolved, we managed to have a very successful first session. MOTE is a very fast-paced game, which encourages aggression and patience both.

France managed to pry Belgium and Luxembourg from Austria, and has taken most of Italy. Currently, France and her ally, Spain, are engaged in a massive brawl against a powerful coalition of Great Britain, Austria, and the Ottoman Empire. Coalition forces have suffered a number of defeats, and Austria's military capacity is almost spent following a recent French push into the heartland of the Habsburgs. Several titanic battles have occurred in Northeastern Italy, as armies of well over two hundred thousand men clash over and over again. Thus far, the French have had the better of each engagement, usually inflicting two-to-one casualties. However, they have not been able to destroy either the Austrian nor the Ottoman armies outright.

Meanwhile, the British control the seas, though they are often challenged by Spanish and French ships. The perfidious English have also launched several large-scale raids against the Franco-Spanish alliance, to varying degrees of success. Operations in Sicily, finding little resistance, were rather successful, while several attempts at invading France were repulsed, culminating in the destruction of an entire British corps at the Battle of Le Mans. The British are having more success against the Spaniards near Seville, but have yet to push deep into the country. They also took the vital island of Malta, giving them a safe harbor in the Mediterranean.

Elsewhere, the Ottomans and the Russians carved up Persia, while the Russians have bitten off massive chunks of Poland, Sweden, and are deep into Prussia, expanding the reach of their own empire. Austria has struggled, but thus far has managed to retain control of its German satellites. While France appears to be the great threat at the moment, Russian expansion must be of considerable concern to their Southern European neighbors.

The game is still very much in play.
-Never interrupt your enemy when he is making a mistake.
Napoleon Bonaparte
Top

I'd love a screenshot or two if anyone has some! 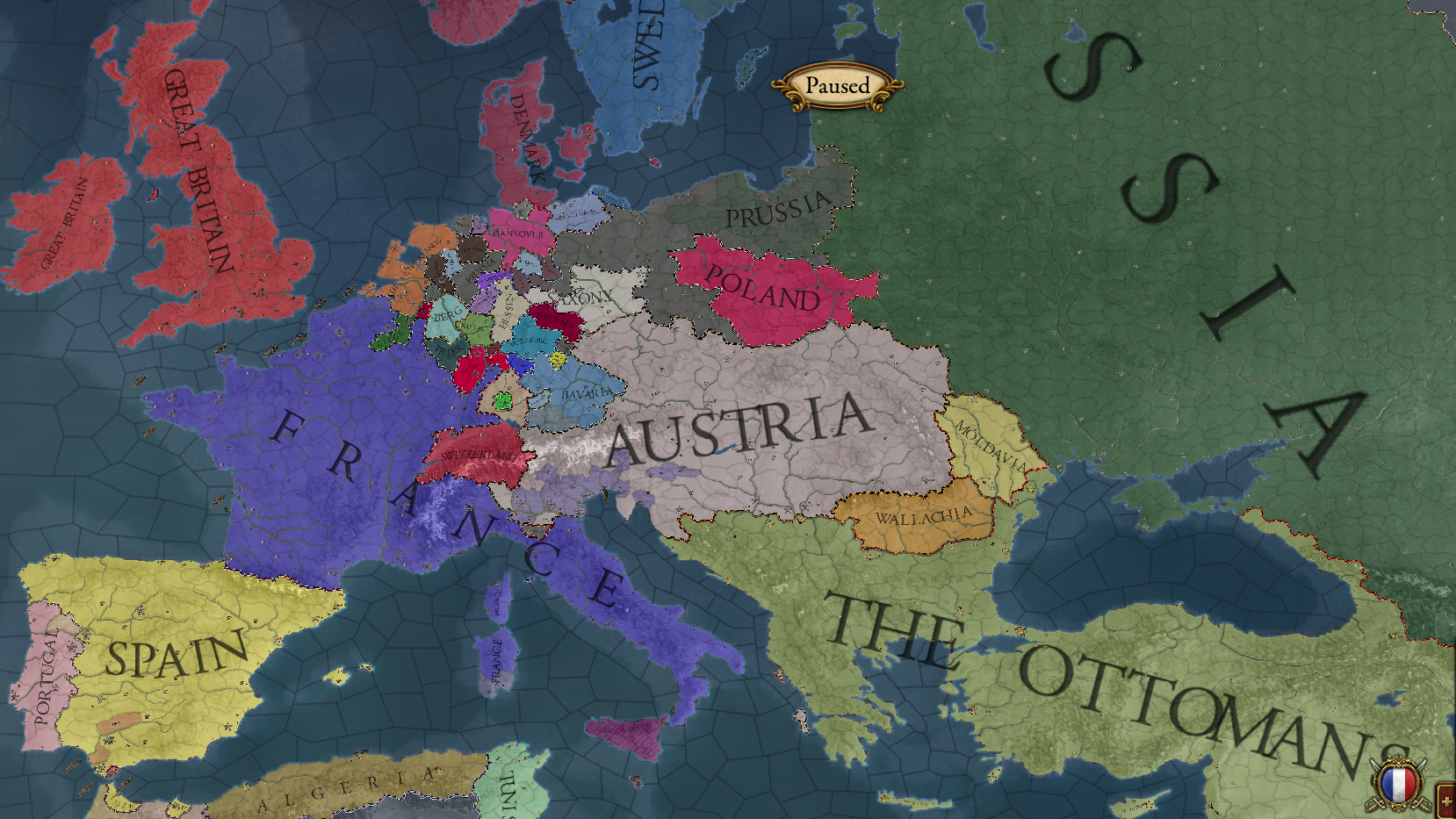 I know...unfortunately, the Spaniards and the Russians do not understand the monster they are creating with their complacency...

The First Coalition is recruiting!!

Switzerland is also a French puppet, while Poland is a Russian puppet.
-Never interrupt your enemy when he is making a mistake.
Napoleon Bonaparte
Top

Also, monster? No sir, we are the purveyors of democracy and the Enlightenment! We are going to liberate your asses so hard, you don't even know.
-Never interrupt your enemy when he is making a mistake.
Napoleon Bonaparte
Top

The @$$hole French ambassador had the gall to say we'd make an excellent Turkey Republic!!
Top

Hey now, don't go... losing your head over one little comment.
-Never interrupt your enemy when he is making a mistake.
Napoleon Bonaparte
Top

Repost from the other thread:

For those of you following along, we had another energetic session, though not quite as cataclysmic as the first one. Austria and the Ottomans sued for peace following a pyrrhic victory outside the gates of Vienna (35k French dead to 67k Coalition), and France was able to secure Northern Italy, putting them close to total victory. Russia, too, remains on the threshold of domination, having wiped Prussia off the face of the map, and has pushed deep into Germany, as far west as Dortmund. Should France or Britain lose land or naval domination, Russia is well-poised to pick up the mantle of victory.

Meanwhile, the war between Britain and France ended rather inconclusively. France gained control over Hanover, which Britain was ill-equipped to defend, while Britain was able to snatch Sardinia and Sicily from France. Britain's naval superiority is effectively uncontested, though English merchants and transports report significant harassment and losses to Spanish raiders and privateers. The two superpowers remain in a stalemated position for the moment, an uneasy peace reigning as the they regroup.

Meanwhile, France continued its expansion, subjugating Portugal, annexing the Netherlands, and occupying most of northwestern Germany and southern Denmark. The Austrians, not cowed by their defeat, went on to secure most of central Germany. There are now few neutral territories left in Europe. Nearly every nation has joined, or has been forced to join, one of the major powers. In North Africa, the Ottomans expanded westward into Morocco, giving them complete control over the southern Mediterranean.

Finally, Britain is involved in an inconclusive war with Spain. Temporarily emboldened by a truce with the powerful French Army, they have pushed into Southern Spain, only to find conquest more difficult than anticipated (in Spain? No!). With this exception, the Great Powers of Europe are currently at peace with one another.

As the Sultan of the Ottoman Empire noted, "The First Stage of the wars has ended." France and Russia are ascendant, while Britain retains control of the seas. Yet Austria and the Ottomans, despite their defeats, remain dangerous and poised to strike.
-Never interrupt your enemy when he is making a mistake.
Napoleon Bonaparte
Top

Is there a good video of good decent gameplay of the mod or game generally?
Top 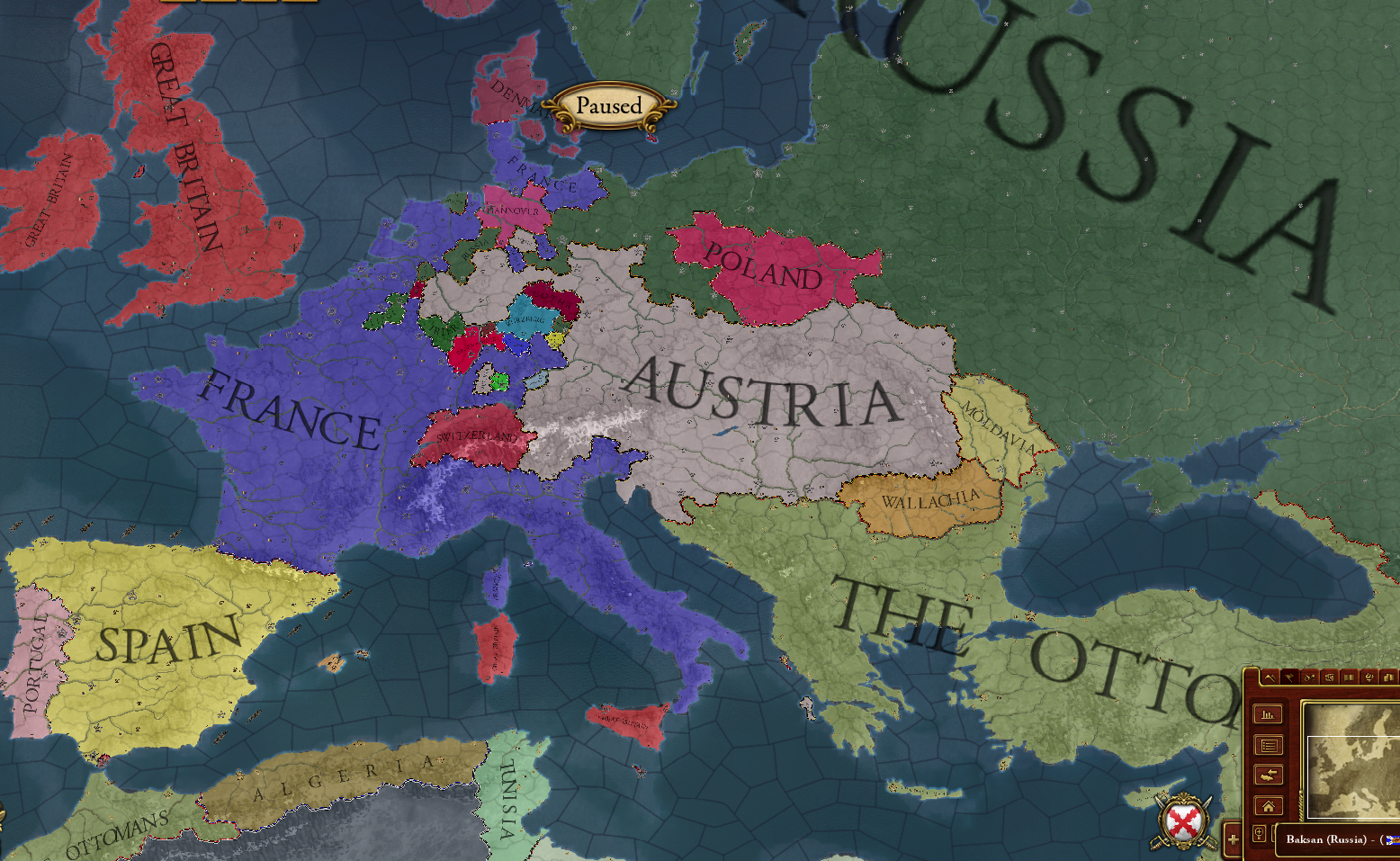 Not really. This is game is pretty much abandonware and other than the occasional meme video from iSorrow, not much out there.

Users browsing this forum: No registered users and 2 guests